"The path to human atrocity begins by dehumanizing the victim."

To remember the inhumanity of the Holocaust, it is important to acknowledge that the Nazis murdered 11,000,000 men, women and children 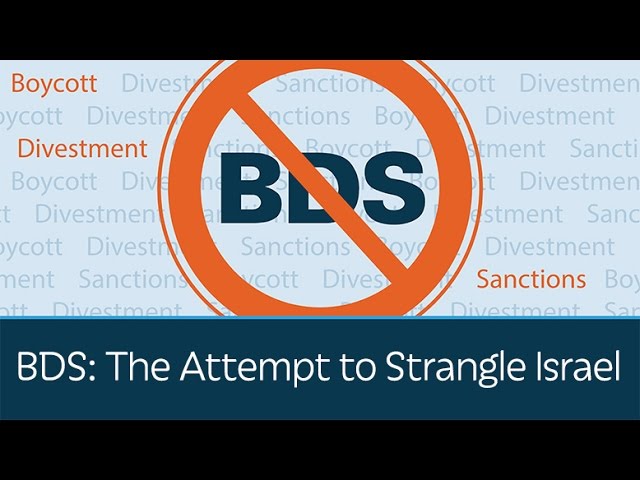 BDS stands for the movement to boycott, divest from and sanction Israel.

The movement takes much of its inspiration and rhetoric from the successful boycotts of the 1980’s and early 1990’s that forced the South African government to abandon its system of racial apartheid. This is why the BDS movement tries so hard – despite so many facts to the contrary – to draw a parallel between Israel and South Africa.

BDS leaders also try very hard to portray themselves as peace activists who are using non-violent means to force Israel to withdraw from the West Bank and make way for a Palestinian State.

Israel is a War Criminal

Since its birth in 1948, Israel has not known a day of real peace with its neighbors. Israel’s wars have been wars of necessity, in which the Jewish state has been forced to defend itself from attacks by its neighbors.

In Israel’s first decades, the attacks typically came from armies, the fighting took place on battlefields, and most of the casualties were soldiers. Since Israel was not forced to fight in civilian areas, there were very few Arab civilian casualties.

But in recent decades, the attacks have come from terrorist groups – Hezbollah and Hamas – which fire their missiles from civilian areas. Any military response to an attack launched from a civilian area must take place in that same civilian area. Thus the terrorists – not Israel – are the ones putting these civilians in harm’s way.

Yet the fact that Israel must fight in civilian areas does not mean that Israel has the right to fight recklessly. Israel must target the terrorists and their weapons while striving to protect any non-combatants that may be nearby. And Israel goes to impressive lengths to do just that.

For starters, Israel is slow to react to provocation. Israel often absorbs hundreds of missiles fired at its cities and towns before launching any kind of sustained response. But if the missile fire continues, even Israel will eventually do what most other countries would have done far sooner: defend her citizens.

Once at war, Israel issues a series of warnings to civilians. Before operating in any neighborhood, Israel blankets the neighborhood with leaflets that set forth both the time operations will commence and the safe routes by which civilians can flee in advance. Those who heed these warnings can and do escape to safety.

Then, before striking any particular building, Israel issues more focused warnings. These typically involve calls and text messages to the cell phones of every inhabitant of a targeted building. Once again, those who heed the warnings can and do escape to safety.

Sadly, Hamas and Hezbollah do everything in its power to place and keep civilians in harm’s way. Their efforts to spike the civilian death toll include the following, documented techniques:The terrorists have a cynical strategy. They seek to bring Israeli rocket fire down upon civilians. Then they exploit these civilian deaths to generate international condemnation of Israel.

If these tactics don’t produce enough civilian casualties for their purposes, the terrorists will just make stuff up. They have used photos of civilian dead from other wars 17 and even from movies 18 to generate the outrage they seek.

When people condemn Israel for these civilian deaths, they are not protecting civilians. They are only rewarding the cynical tactics of Hamas and Hezbollah. Blaming Israel without holding these terrorist organizations responsible for their aggression is not only immoral, it’s dangerous.

14 UNWRA, “UNRWA Condemns Placement of Rockets, For a Second Time, in One of its Schools,” July 22, 2014 (http://www.unrwa.org/newsroom/press-releases/unrwa-condemns-placement-rockets-second-time-one-its-schools) and Terrence McCoy, “Why Hamas stores its weapons inside hospitals, mosques and schools,” The Washington Post, July 31, 2014

Let’s start with ethnic cleansing. The crux of the complaint is that after Israel declared its independence in 1948 it went to work expelling its Arabs residents in order to create an exclusively Jewish state. In the process, 700,000 Arabs were forced from their homes.

The truth is the exact opposite.

In 1947, the United Nations voted to partition Palestine into two states, one Jewish and one Arab. This Jewish state was to have a sizeable Arab minority. Palestine’s Jews enthusiastically accepted this compromise. They actually danced in the streets to celebrate.

The Arabs had a different reaction. The leaders of Palestine’s Arabs and the surrounding Arab states all rejected the partition of Palestine into two states. Instead, they vowed to destroy the Jewish state. The day after the UN vote, Palestinian Arabs launched a sustained series of guerilla attacks against their Jewish neighbors. And when the British officially departed Palestine in May of 1948, five neighboring Arab states invaded Israel.

Before the Arabs launched this war to destroy Israel, there were no Palestinian refugees – not one. The Palestinian refugee crisis was the direct result of this Arab aggression. Wars are terrifying, and the large majority of Palestinian refugees simply fled the fighting as it approached their villages. In the limited cases where Israel expelled Arabs, it did so because of a clear military necessity created by this war.

Having to flee one’s home is a terrible tragedy. No one should deny the human suffering experienced by these hundreds of thousands of Palestinian refugees. But recognizing their suffering does not require us to blindly blame Israel for it. The ultimate responsibility for the Palestinian refugee crisis rests with those Arab leaders who rejected Israel’s creation and launched a war to destroy it.

The claim of genocide is just as easily disproven.

Simply out, Israel has never had a policy of intentionally harming Palestinian civilians. Quite to the contrary, even during wartime Israel goes to extraordinary measures to protect Palestinian civilians. These efforts to safeguard Palestinian lives – efforts that expose Israeli soldiers to far greater risk – are the exact opposite of genocide. These are the policies of a government that values all human life.

The math could not be clearer. Genocides – the intentional mass murder of certain groups of people – shrink the population of the targeted group. Hitler’s Holocaust, for example, reduced Europe’s Jewish population from 9.5 million in 1933 to 3.5 million in 1950.

In 1947, there were approximately 1.2 million Arabs living in the British Mandate for Palestine. Today — despite the fact that many hundreds of thousands have left this territory — that original number has grown to approximately 6 million (4.4 million Palestinians in the West Bank and Gaza plus 1.8 million Arab citizens of the Israel). There are actually more Arabs living in Israel today than were living in all of Palestine when the state of Israel was created.

Simply put, if Israel is trying to commit genocide against the Palestinians, it’s doing a terrible job of it.

Israel is an
Apartheid State

“Apartheid” was the official South African policy that sought to maintain a complete political and social separation between South Africa’s whites and blacks. Under this policy, South African blacks were not permitted:

Anyone who has ever been to Israel knows the minute they get off the plane that no such segregation exists in Israel. Israel’s Arab citizens are full citizens. They attend of all Israel’s major universities. They are treated in all of Israel’s hospitals. They serve in government and the judiciary. They are welcome in all of Israel’s restaurants and cafés. Because the claim that Israel is an apartheid country is so patently false, many BDSers are too embarrassed to say it. They argue instead that apartheid exists between Israel proper – where Jews and Arabs live as full equals – and the West Bank and Gaza, where the Palestinian residents are not Israeli citizens.

It’s true that West Bank and Gaza Palestinians are not citizens of Israel. But here is an important point to note – they don’t want to be Israeli citizens. Some Palestinians would like to destroy Israel. Others are be prepared to live in a Palestinian state alongside Israel. But no serious Palestinian leader has ever asked that the West Bank or Gaza be annexed by Israel.

Thus the answer is not for Israel to annex the West Bank and Gaza and extend Israeli citizenship to their residents. The entire Arab world would angrily reject this. The answer is for both sides to reach a peace deal. Israel has repeatedly offered to do exactly this. Unfortunately, the Palestinian leadership has repeatedly rejected these offers.